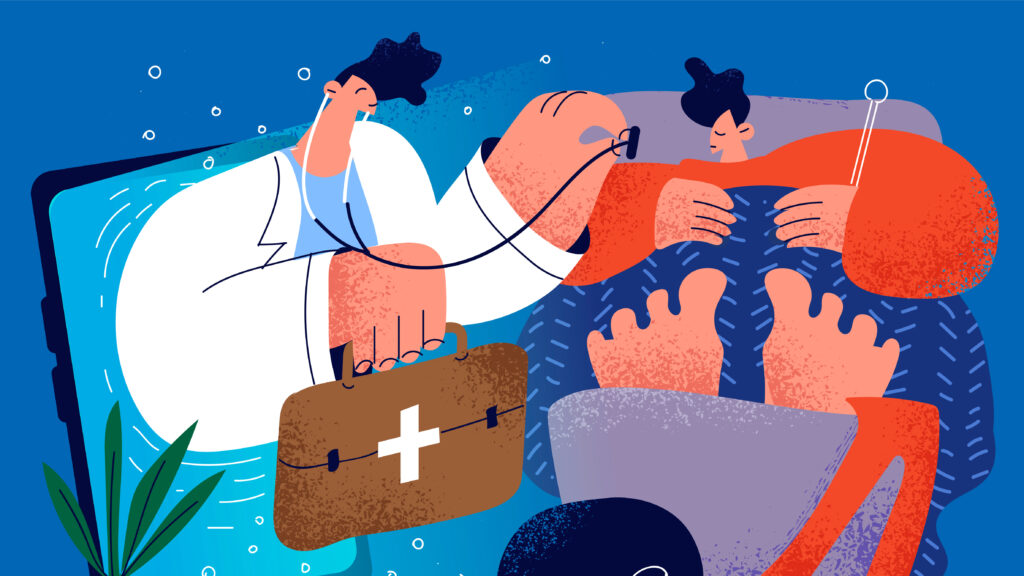 AAs the world stares down the barrel of climate change, the health care system—responsible for about 9% of all US greenhouse gas emissions—is finally taking action.

Hospitals, in particular, are working to mitigate their impact and have maintained telehealth as a primary strategy to reduce carbon use, by eliminating millions of kilometers of travel to and from health facilities. But while digital health in its many forms has significant potential to control healthcare emissions, research into its impact is still very much in its infancy—and the metrics used are often brief.

“Digital health is late to the party,” said Enrico Coiera, a digital health expert at Macquarie University who wrote an editorial in the Journal of the Medical Informatics Association calling for the field to play a role in mitigating climate change. “It’s very compelling given what the evidence says.”

Most research on the potential climate effects of digital health has focused on the fringe benefits of substituting one care for another: What happens when a patient sees their doctor over Zoom instead of going to the office? How much paper is saved when they view their records online instead of getting a printout? How much PPE disposal is avoided when a nurse removes a patient’s vital signs?

One paper analyzing data from a Spanish insurance company in 2020 estimated that around 2,000 net tonnes of CO2 emissions were avoided due to 640,000 digital appointments during the Covid-19 pandemic – after accounting for the increase in emissions associated with video conferencing – and nearly 5,000 tonnes are saved by changes to the download of digital reports. That’s the equivalent of about 8,000 round-trip flights, across the country, thanks to telehealth.

“But really, it’s only a small part of the footprint of digital health technology,” said Zerina Lokmic-Tomkins, a nursing and informatics researcher at Monash University in Australia. “It’s a whole other life that no one is aware of.”

The benefits of implementing digital health, Lokmic-Tomkins stressed, should be balanced against their significant carbon impact – which can be much harder to tabulate. There are upstream and downstream environmental costs associated with the expansion of digital care systems, from increased computing infrastructure and data storage to the mining and disposal of materials for the growing ecosystem of devices used to support remote care.

“I would take any study that says something alone is a solution,” Coiera said.

In particular, climate analyzes of digital health need to consider how the patient care pathway changes when new technologies are introduced. “The easy thing to do is to imagine this small optimization, whether it’s telehealth consulting or something else, and then assume that nothing else has changed,” Coiera said. But what happens to the time and money patients and providers spent traveling to doctor’s offices or technicians no longer trained to interpret radiographs? One paper called these unknowns “rebound effects”: “If these backup activities were high carbon emissions, there is a risk that much of the savings could be undermined.”

Consider a group of patients who were followed up via telehealth after being discharged from an emergency department in Los Angeles. A recent analysis published in JAMA Network Open found that they were more likely to return to the emergency room and be hospitalized than those who received in-person visits. The initial adoption of telehealth may have reduced carbon emissions—but overall, it led to higher healthcare utilization, travel, and likely emissions.

Such careful unpacking is important not just for the careful implementation of remote services, but for the growing class of clinical algorithmic tools that require power-intensive computing to develop. “One of the main issues facing digital health technology is really data — data generation, how much of it is stored and how long it’s stored,” Lokmic-Tomkins said. “How do you redesign this infrastructure to be less carbon intensive?”

One recent paper found that it could reduce greenhouse gas emissions by 80%. “Implementing autonomous AI in a healthcare setting is something that requires and creates a release in its development,” said Risa Wolf, a pediatric endocrinologist at Johns Hopkins Hospital who published the paper with the AI ​​company that built the tool. “But once it’s done, it’s very scalable, and it also reduces travel for providers and patients,” she added.

But that study did not include a full life-cycle analysis of the device installation. And not all clinical AI is created equal. Relatively few algorithms are purely independent; more common are “assisted” AIs that still require the supervision of a healthcare professional. They, Wolf said, could actually increase greenhouse gas emissions, because the technology requires more resources without significantly cutting back on manpower. “I think a rigorous study of different systems in the future would be useful,” Wolf said.

As AI and other forms of digital health become a more entrenched part of clinical care, climate advocates say it’s important to focus on emissions from the earliest stages of development.

“If we do that, we can certainly reduce the overall digital health footprint,” Lokmic-Tomkins said. “If we don’t think about it, there’s always a need to make something better, bigger and better, without considering what it actually does.”

A plan ahead could help the right people in digital health deploy tools that will simultaneously improve health and reduce carbon emissions. A recent survey of 85 health informatics professionals found that about three-quarters wanted to be involved in decarbonization—but nearly as many were unaware of tools that could help them address the impacts of climate change in their work.

And while focusing on carbon footprints could put a damper on business, Coiera stressed that the industry would be well served by standing up and paying attention now. “There are a lot of opportunities here for people who come together,” Coiera said. “It won’t matter in 20 years if you don’t address climate change.”

This story is part of ongoing coverage of climate change and health, supported by a grant from The Commonwealth Fund.